A Place for Mystery
564
post-template-default,single,single-post,postid-564,single-format-standard,stockholm-core-1.1,select-theme-ver-5.1.7,ajax_fade,page_not_loaded,wpb-js-composer js-comp-ver-6.0.3,vc_responsive
Jean A. Costa / Faith  / A Place for Mystery 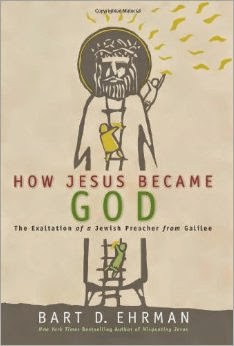 A Place for Mystery

Affirmation: I let Mystery have a place in me.

Terry Gross of NPR’s Fresh Air was interviewing Bart Ehrman, a
professor of religious studies at UNC, Chapel Hill.  He had just written another book.  This one is called How Jesus Became God.  I had a feeling I knew where this interview
was going but I love to learn about anything to do with religion, any religion
and I love talk radio, so I stayed tuned in.
NPR had this introduction on their web site, “When Bart
Ehrman was a young Evangelical Christian, he wanted to know how God became a
man, but now, as an agnostic and historian of early Christianity, he wants to
know how a man became God.
When and why did Jesus’ followers start saying “Jesus as
God” and what did they mean by that? His new book is called How Jesus
Became God: The Exaltation of a Jewish Preacher from Galilee.
‘In this book I actually do not take a stand on either the
question of whether Jesus was God, or whether he was actually raised from the
dead,” Ehrman tells Fresh Air’s Terry Gross. “I leave open both
questions because those are theological questions based on religious beliefs
and I’m writing the book as a historian.'”
I gave up doubt for this year’s Lent this Easter Season.  For me, it’s easy to doubt.  It seems to me that our egos are so involved
in our identity that most of us believe we need to be able to understand
everything.  If we can’t understand it,
it must not be true.  But, over the years
I’ve discovered I actually understand very little.  There is so much that is simply unknown.  I could list all the questions I have about
life and the Universe but I’m sure that you have many of your own.  The simple question about what happens to us
after we die is one very prominent unknown.
One of life’s greatest mysteries.
I was surprised by my reaction to Professor Ehrman’s interview.  I know I have only that segment on which to
base my response to his theories but his words left me feeling very sad.

I did listen carefully.
Certainly his research was very factual.  There didn’t seem to be much one could
dispute.  He had gathered his facts very
carefully.  His research confirmed his
beliefs.  Like the web site stated, he
had gone from being an Evangelical Christian to an atheist. It appears the New
Testament gospel stories about what immediately took place after Jesus died is
fictitious.  Oh yes, Jesus was tortured,
humiliated and crucified but there was no way he was then taken down from the
cross after his death, placed in a tomb and rose three days later.  According to Roman tradition, that’s just not
how things were done back then.  Back
then?  As far as I know that’s not how
things are done now.  Rising from the
dead sure isn’t the norm even in today’s world.
Father Alapati of St. Michael’s Catholic Church here in Cary
recently told a joke as part of his homily.
It appears a gentleman rose one morning to find his obituary in the
paper.  He was shocked and immediately
called his friend and said, “Did you see my obituary in today’s
paper?” His friend responded, “Yes, but where are you calling from
heaven or hell?”

Facts supporting the Resurrection would be lovely.  The Apostle Thomas seemed to feel the same
way.  “But he said unto them, Except
I shall see in his hands the print of the nails, and put my finger into the
print of the nails, and thrust my hand into his side, I will not believe.”
(John 20: 25) I’ve always been fascinated by the Apostles.  So afraid, so timid, so uneducated hiding
away in a room somewhere, waiting for those angry crowds to come and pull them
off to the same torture and death their leader just endured.  I can feel the fear.  I can almost taste it.  We’ve seen what angry crowds do.  We’re watching it now in all parts of the
world.  I would be terrified.  What happened to change them so?  What facts can be gathered to explain why they
would leave that room and go out into the crowds and begin to preach the Good
News?  These men (and let’s hope a woman
or two) left their safe space and changed the world forever.  How does one explain that?  It’s a mystery.

My fellow yoga teacher, friend and mentor, Nancy Hannah, shared
with me a saying with which her mother, Bunny Stone, would guide her.  “Let mystery have its place In
you.”  According to Nancy, her mom
was a remarkable woman who made amazing in-roads and created life changing
programs here in North Carolina.  In
Rachel Remen’s The Will to Live and Other Mysteries she writes about the
fact that our western culture is more a culture of mastery than mystery but
life is more about mystery than mastery. Most of us, however, refuse to
recognize the mystery that permeates our lives.
We need to understand all things because by understanding we believe we
are in control.  It’s a fallacy.  After controlling our thought process, there
is very little else of which we are in control.
How our egos interfere in the really important values of our
lives: peace, hope, love, gratitude, compassion and yes, faith.  What facts are available to prove these
qualities exist?  Can we ask to place our
hands into them, our fingers?  Here is
where faith must triumph over facts.
Faith, trust on steroids, is believing in something so completely
irrational because one has let go of their ego.
The test here is to decide to believe and to let God work within and
through us.  This is when we are called
upon to let mystery have its place in us.
I find comfort in my faith.  I
find peace.  I like resting in the
mystery and not trying to figure it all out.
We might not be able to hold the proof in our hands but if we choose, we
can hold it in our hearts.