Being Catholic
545
post-template-default,single,single-post,postid-545,single-format-standard,stockholm-core-1.1,select-theme-ver-5.1.7,ajax_fade,page_not_loaded,wpb-js-composer js-comp-ver-6.0.3,vc_responsive
Jean A. Costa / Faith  / Being Catholic 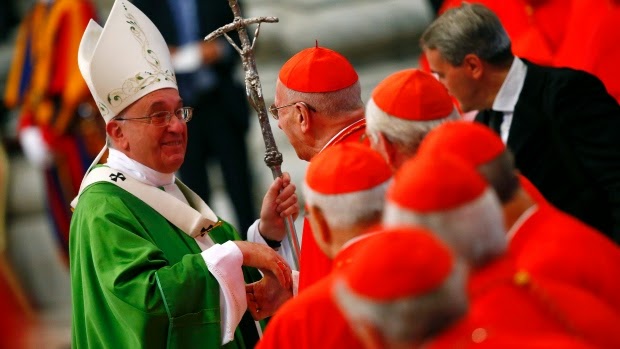 Affirmation:  I love being a Catholic
During this month, October 2014, the Catholic Church has been front-page news.  It’s not unusual for the Church to be in the headlines.  It seems to me it’s an easy target for criticism, especially in this day and time.  This time the initial news being reported was more positive.  Pope Francis called a synod, a group of bishops from around the world, and the discussion that came from that meeting was highly publicized.  It’s unclear if everything that was written about the meeting was true but that’s nothing new for the media.  The initial bent of the stories would lead most people to believe that the Catholic Church has decided to become more liberal.

At St. Benedict’s Church in Linville, NC Father Christopher Gober’s homily revolved around the procedures that are required before the Church, or what I would prefer to refer to as the hierarchy, makes any changes in Church doctrine.  “It will take years.”  Well, it doesn’t take a genius to figure that out.  The two thousand year old church has never been quick to make any changes.  It took them several hundred years to forgive Galileo who they excommunicated because he claimed the earth revolved around the sun.  With a history like that those of us, which includes me, who are ever hopeful that our church will become more open and accepting are not holding our breath.  But, there are some signs that our Church, the people who make up the foundation of our parishes may see a greater shift towards compassion and inclusion that hasn’t appeared to be the main focus until lately.

Before the synod ever began I was listening to a Tapestry podcast with Mary Hines called, Liars, Cheats and Sinners and the writer she was interviewing, described as a Roman Catholic thinker, Mary Gordon, said she didn’t expect anything would be discussed that would make a difference for the laity.  She, however, I am pleased to say, was wrong.  Even if the doctrines are the same and it takes years, if ever, to make changes, Pope Francis seems to bring a whole different flavor to the meaning of our faith.  When the leader of an institution calls for compassion and inclusion, when a leader in an institution is humble and deferential and when a leader of an institution leads by example and not simply with words, the institution will reflect those qualities and that, it seems to me is Pope Francis.

I may be grasping at straws here, hoping that he will bring our church to a place where many times people feel as if they simply can’t ever get it right, where many people just find it too difficult to be part of such a restrictive environment.  I know in many ways the Catholic Church is a liberal institution if you compare it to many other fundamental faiths of the world but in my opinion some of the stands it takes on issues which affect so many of it’s faithful are just wrong.  My hope is Pope Francis will lead these men to a place of compassion and openness so that the fastest growing religion in the United States today is not “former Catholics.”
Our Church has so much to offer and because of all the bad publicity some of which is very justified, we aren’t recognized for all our Church has done and continues to do to make this world a better place.  For example, the Catholic Church feeds, educates and tends to the health of tens of thousands of people a day.  The people they serve aren’t asked about their belief system or about their religion, they are simply helped.  Why isn’t that ever written about in the news?

I once had someone tell me she was an Protestant because unlike Catholics she didn’t have to leave her brain at the church door.  I can’t even imagine why someone would think it was all right to say that to anyone but trust me that’s not true. I have carefully considered whether or not I want to continue to be a Catholic.  I’ve headed out many times; I’ve studied many faiths; I’ve read many different theologies.  I finally had to recognize that I was always called back to Catholicism. That’s my home.  Maybe, just by being who I am I can make a difference in the way the church responds to some of these controversial issuers.  Certainly, I have a better chance than if I walked away, if I simply quit.
I had one very powerful experience of asking God in prayer what path I should follow.  I didn’t’ know how the answer would come but I believe in answered prayer and I did expect an answer.  The answer came in a dream.  Jesus floated down, He wasn’t very clear but I was pretty sure a white floating being was divine and He said, “Jean, I am the answer for you.”  I believed it then and I still believe it now.  I have a dear friend who has told me for years, “I don’t let the Church interfere with my relationship with God.”  That’s not good enough for me.  My Church needs practices and rituals that enhance and strengthen my relationship with God and with that, my relationships with my family, friends and even my enemies and it does provide those practices.  Unfortunately, the emphasis on Jesus’ message of love and compassion gets clouded and our beautiful faith gets tied up in the rules and regulations.

I love the Catholic Church.  I love being a Catholic.  Yes, I know it has zits and dysfunction.  What family doesn’t?  I have chosen to stay in this family, this place where the people I interact with are more often than not, kind, generous, compassionate and loving. I’m still a Catholic because of my belief in the sanctity of the Eucharist and the rituals of the Mass and our seven sacraments and because it has led me to this relationship with Christ that sustains me in all things.
The last headline I saw about the synod before I wrote this said, “Pope Francis: ‘God is not afraid of new things.'”  Yes, I believe we are presently in the hands and heart of a loving, compassionate person who will bring our church to a place of more acceptance and kindness; who will help our parishes become places of refuge and hope; who will guide the hierarchy towards being less rule oriented and more people oriented.  I’m not too hopeful about changes with the perception of women’s roles but that’s a whole other blog.  I do believe, however, that our Pope Francis hasn’t left his brain or his heart at the door and I don’t believe he expects us to live our faith and our lives without deep thought and commitment.