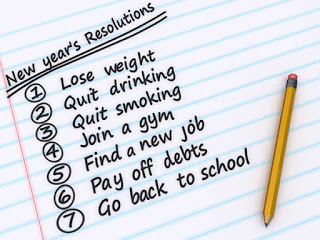 How many new years have you tried to enact some form
of change for yourself?  New Year’s
resolutions present themselves every January, and once in a while a resolution
works but all too often they fail leaving us exactly where we started and
feeling powerless or just plain sad.  One
of the problems with a resolution is that most of them are phrased using the
future tense.  “This year I will begin
exercising.”  “As of January 2nd, I will
begin my diet.”  “I will stop
smoking.”  It’s like making a wish and
then sitting back and waiting to see if it comes true or not.
A more effective way to initiate change in your life
is to set an intention and then to create an affirmation.
When teaching yoga I encourage the participants to
“set an intention” for their practice session.  That’s all I say.  I could give them examples but it’s so much
more effective and powerful when a yogi forms his or her own intention.  I have carried this beginning practice step
into my life.  I make an effort to set an
intention for each day and especially for the beginning of the New Year.  Once my intention becomes known to me, I then
form an affirmation to cement it into my mind, body and spirit.

What exactly is an affirmation?  An affirmation
is a statement that makes firm that which you believe.  It is a statement
about that which you perceive to be true.
You can have positive or negative affirmations.  When I began
writing out my affirmations, I discovered the power of controlling my
thoughts.  Once you take charge of what
you’re thinking, you then take charge of your life.  For me there was also joy and power in the
process of creating the affirmations.  I
love testing the words, seeing what resonated and deciding what was so important
to me that I would focus on it day after day.
Not sure it will work for you?  Think about this.  All those negative statements you’ve been
telling yourself for as long as you can remember, how have they been working?  They’ve probably worked quite well but
unfortunately not to your benefit.
Changing them to positive statements will work too and think how much
better you’ll feel.

What does your self-talk look like?  Sometimes,
you’re having the conversation when you’re alone.  Sometimes, you’re saying
the same things to yourself but you’re not alone.  And, sometimes you’re saying things aloud
about yourself that you would never say to or about a dear friend.  What are the phrases you’ve adopted over the
years?  “Boy, am I stupid.” or “I never get it right!”
How about, “I can’t do that.” or “It frightens me.”  An affirmation is about changing the things
you tell yourself in order to empower yourself and improve the quality of your
life.  It’s a powerful free tool that can
make a positive difference in your life.  Begin by noticing when your
self-talk weakens you, makes you feel powerless, or useless.  Pay
attention!  That’s the first step, awareness.
When creating an affirmation avoid the word
“not.”  It won’t work to your benefit; it may even work to your
detriment. I heard a story many years ago about a mother teaching her
daughter to drive.  There was a huge
bolder in the road ahead.  The mother
kept reminding her daughter about it.
“Don’t go near the bolder.”
“Don’t’ hit the bolder.”   What do
you think happened?  They were both so
focused on missing the rock in the road, they drove right into it.  It’s the same with negatives in your
affirmation.  You won’t hear the “not”
and you’ll move right into the place you’re trying to avoid.
There are phrases you can use instead of enlisting the
negative.  For example:  “I release” or “I let go
of.”  Two of my affirmations using those phrases are:  “I
let go of fear and anxiety.” and “I release myself from my childhood
limitations.”  It’s simply more
effective than saying: “I will not let fear and anxiety influence my
life.”  I have chosen to tell myself, “I eat mindfully”
instead of saying, “I do not eat foods that are bad for me.”  Another example is, “I attract financial
prosperity.” rather than, “I don’t waste my money.”  Can you hear the difference?  Can you
feel the difference?

I sometimes write out the affirmation without too much
thought and then take time to fine tune it. Begin by taking a few minutes
and re-reading the words.  You are
looking for words that stir an emotion in you.
Don’t over analyze it.  Let the
sentence be a statement of how you want to perceive your life.  Write it in the present tense.  It may be a statement you have a difficult
time believing but try it anyway.
Sometimes those are the most powerful. I have a dear friend whose
affirmation is, “I am a gifted and talented artist.”  When she first claimed that, she did not feel
that way but that’s how she wanted to feel.
It worked!  She now is a gifted
and talented artist.  Her affirmation led
her to the steps which led her to believe in herself and to expand her gifts
and talents.
One example of an affirmation I use in my daily
practice is:  When I stay focused on the
present, I am calmer and more peaceful.
I created this one because I believe what is truly important is
today.  Worry magnifies my difficulties and diminishes my ability to live
fully in the present moment.  Anxieties
almost always arise because I fail to put all my effort into the here and
now.  I am calmer and more peaceful when I focus more on the gifts of each
day, instead of worrying about tomorrow or reliving something unpleasant from
the past.
The quality of my life is all about how I perceive
every event and person, including myself.
If I can change myself for the better, won’t that help others? If you
did the same thing, wouldn’t that help you, the world, or at least your world?
It’s an amazing process. Take full advantage of it.  Write them down, write them every day, post
them on your bathroom mirror, by your doorway, on your computer and wait!
Instead of another set of New Year’s resolutions you didn’t keep, you’ll have
created a set of affirmations that will change your life in ways you never
before dreamed possible.