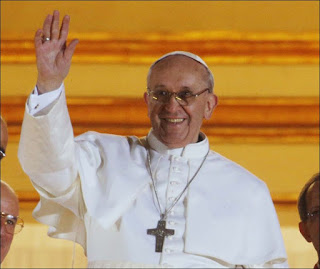 Is God is a Feminist?

Affirmation: I
believe that when the gifts of women are recognized and honored, the world is a
better place.

This week, the
second week of March, 2013 the Catholic Church elected a new pope, Cardinal
Jorge Mario Bergoglio became Pope Francis.
It didn’t seem to matter if you were a Catholic or not, the event
dominated the headlines around the world.
World headlines are normally dominated by some dreadful disaster or
horrible tragedy.  I found this focus on
the election of a new the pope to be more uplifting and inspirational. The
election only took two days and five votes before white smoke, the symbol
announcing a new pope, rose above the Sistine Chapel.  Tens of thousands were there waiting in the
rain for the news.  Curiosity was
abundant.  There had been much
speculation about who the new pope would be and now, we were to finally find
out.  The questions were about whether or
not he would be a Vatican “insider.”
Would he be from Europe as were most of the former popes or would he be
from another continent?  Would he be
younger than popes of the past?  Would he
possess a conservative or a more liberal theological perspective?  The questions and speculation were endless
and went on for weeks.  There was only
one question no one was asking.  Would
the new pope be a man?

This same week of
March there were at least two specials, one on 60 Minutes and one on Good
Morning America about a new book that had just been released by the COO of
Facebook, Sheryl Sandberg, Lean In: Women, Work and the Will to Lead.  When asked if she was trying to reignite the
feminist movement she said “yes.”
She gave the statistic that only 4% of the Fortune 500 companies were
led by women and that women still only made 70 cents to the dollar that men
make.  “The woman’s movement has
stalled.” she said.
This year is also
the 50th anniversary of Betty Friedan’s book, The Feminine Mystique, her
book being the reason many attribute to the beginning of the woman’s
movement.
Whether or not you
consider yourself a feminist you cannot deny that the role of women here in the
United States and in many civilized parts of the world, has changed.  Many would argue it has not been for the
better.  Many would argue women have only
begun to make inroads into being the dynamic influential presence they need to
be in order to bring more balance and compassion into our universe.  It seems to be a topic with many emotional
ties and not a simple one.  Women’s roles
in the Catholic Church have always been a topic of discussion and
controversy.  Change comes very slowly to
my church but with the election of Pope Francis, I have renewed hope.
In the short time
he has been pope, the one word that is repeated most often is
“humility.”  His first act
after being elected was to ask the throngs waiting in the rain to see him and
to hear him was to ask for their prayers.
Stories abound about his association with the poor, not just in name but
in deed.  He cares deeply about his
people, us the church.  His theology is
conservative. There will not be any
changes made to the church’s stand on the sacredness of life from the womb to
the tomb.  I can guarantee that.  But, perhaps with his humility he will be
more encompassing of the role of women in our church and see them as not just
holding a place of service but also deserving a place of leadership. I once
heard someone say that Jesus Christ was one of the earliest feminists.  He promoted the ethical treatment of all
people without regard to their status, race or sex.

My thirteen year
old grandson asked his mom if I was a feminist.
The word feminist was said with a tone of derision.  “Why” she asked. He told her it had
been explained to him that feminists hate men.
Thank heavens for the wisdom of my daughter.  “Yes” she answered, “grandma
is a feminist.  I am a feminist.  Your step-father and your grandfather are
feminists.”  She went on to explain
that a feminist doesn’t hate men.  A
feminist promotes the well being of all people regardless of their gender.
I received the message
at an early age that I needed to be responsible for myself.  I needed to be independent.  It was before the feminist movement but it
was clear to me that I needed to find a way to care for myself. A married life,
if I married, of total domesticity would tie me to the success or failure of
another and of that relationship.  Many
women have suffered devastating losses because they did not take any steps to
create a life whereby they could care not only for themselves but perhaps for
others that might come to depend on
them.

I clearly
remember reading The Feminine Mystique.
It was a time before the Internet, before Oprah Winfrey and Doctor Phil.
I had just had a baby and quit my teaching job (not in that order) when we
moved to Norwich, NY, a town of 7000 people.
I knew no one and I was lonely. I was lonely and I couldn’t figure out
why I was struggling.  I had, I believed,
everything I needed.  The baby was
healthy, I was healthy.  My husband was
kind and generous and we were beginning a whole new life.  Help!
I think if I had already read Ms. Friedan’s book, I would have wondered
if my sense of frustration was created because of it but I had not.  When I read it, I knew she had written some
of it just for me.  I was not alone.  It gave me some comfort and a sense of
hope.
I read that most
men today want their wives to work.  They
want them to bring in another income.
The days of Leave it to Beaver, Dick VanDyke or even the more recent,
Raymond are gone.  The main issue however
is that women are still the main caregivers for the children and the home.  It’s a heavy load and I don’t have any easy
answers for how to lighten the burden other than to choose a partner who will
willingly do their share.  I am in awe of
any single parent who manages not only to balance all their responsibilities
but guides their children to successful, productive lives.
I know there are
young women out there who never think about the opportunities they now have as
being hard won by women and men before them but they were hard won.  If it weren’t for their efforts, we wouldn’t
have women physicians, scientists, politicians, and attorneys.  It needs to be remembered there are women in
third world countries who are very aware of the opportunities available to
women in other parts of the world and they can only dream about them.

Sheryl Sandberg’s
book and Betty Friedan’s book lead women to believe they can have it all.  I hope that’s true.  I hope it’s true too that with the
installation of Pope Francis my church, the Catholic Church will finally
recognize what it has been missing all these centuries.  They haven’t uplifted at least half of their
population, the women of their church so many of whom are keeping the faith
alive and vibrant.  Yes, I am a
feminist.  I’d like to see women
priests.  Id like to see a woman
pope.  I’d like to see women being
treated with respect and dignity and women having the same opportunities as
anyone else.  Who knows, if my wishes are
granted maybe I’ll even get to one day see a woman become president of the
United States.