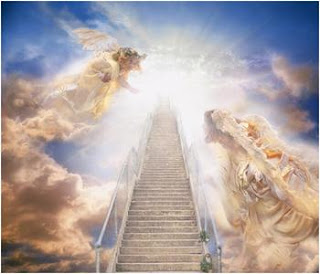 Affirmation: We are spiritual beings having a human experience.

What do you think happens after someone dies?
It’s interesting that we here in America seem to act like death isn’t a reality.  I often get the impression that most American’s simply avoid the topic.  I wonder if most people believe that as long as they don’t think about it or talk about it, it won’t happen.

My dad, Frank Grolimund, died when I was 34.  He was 62.  He died from a glioblastoma brain tumor.  At the time, I didn’t recognize how young we both were.  Now that my age has passed his by several years, I am fully aware of how young he was.  The diagnosis was a mystery to us and to him.  They did the surgery and then we had one meeting with his doctor who explained to us that my dad would be alright for a short while and then the tumor would return.  He didn’t explain what that meant but we knew it wasn’t a good thing.  He never told us, “He’s going to die.”  I’m not sure we would have heard him or believed him.  My dad was not in the room for this conference and no one came to offer us guidance about how to deal with all this.  He died about 18 months after the surgery.  His death had a profound effect on my life.  I don’t think I ever stopped thinking about death after he died.  He had such a zest for life.  It was remarkable!  He was my hero and I loved him dearly.  It’s been over 30 years and it still makes my heart ache that he’s no longer on this earth.

My father-in-law also died of a glioblastoma brain tumor.  It was 20 years later but not much had changed except now we knew what it was and we knew what the doctor meant when he told us after the surgery that it would return.  I, for one, had no doubt about what the doctor was telling us.  My father-in-law, Joe Costa, fought a valiant battle with his wife, Yolanda next to him every step of the way.  He too died about 18 months after his diagnosis.  He too was a remarkable man very much loved by his family and many friends.

Yes, I have many other friends and relatives who have died but these two men were dearest to me.  My father’s death left me with a sense of urgency.  I fully recognized that I didn’t want to miss a thing.  I also don’t put many dreams on hold.  One of the questions in my monthly review is, “What did you want to do that you didn’t get to do?”  I must admit most months I don’t have an answer to the question.  Most months if I had something I wanted to do, I went and did it.  I know there may not be a next month.  That was the gift I was left with after my father’s death.  I was left with an awareness of how important life is today.  I’ve been gifted with the appreciation of the people I love and how fragile their existences are.

Sometimes there are concentrated periods of time when death is more present than others.  There was one two week period in my life when I received notice of two friends dying, the mother of another friend & the sister-in-law of another.  During that time, I was also invited to sing for our church’s Resurrection Choir.  The funeral was for a 75 year old woman.  I kept it together until the dead woman’s daughter hugged her father and the deceased’s husband of 57 years.  57 years!  That’s a lifetime.  How does one go on?  How do widows and widowers do it?  How do parents who lose a child continue to live?
I did my Masters in Social Work training at Hospice of Wake County.  I was one of the bereavement counselors.  I had been a patient care volunteer for years and was very excited to be accepted into their organization.  What I observed during my time with Hospice and have continued to see is that people heal from grief.  Some people heal more quickly than others but at some point people get back to living their lives. It’s actually one of the Five Stages of Grief, first introduced by Elisabeth Kübler-Ross in her book On Death and Dying.  It’s the last stage, “acceptance.”

In the Irish movie, A Shine of Rainbows a widower is left with the care of a young boy that his wife was in the process of adopting.  The young woman who dies loved color.  She herself had red hair and bright green eyes and she wore bright rainbow colored clothing and decorated her home with lots of bright colors.  One day the young boy comes home from school to a house denuded of all the woman’s things.  The husband has gathered them all together and is burning them.  The young boy runs to the fire and saves his “mom’s” favorite scarf.  They grieved in two very different ways.  One was trying to erase all his memories (which, of course, one cannot do) and the other was trying to hold onto all of them (which, of course, one cannot do).  Eventually, they find healing.  They find it by sharing the love they both have for their dead loved one.  They come full circle and you can see them entering the final stage of grief, healing is taking place.

That was the wonderful part of being a bereavement counselor,  I could see people heal.  It left me with such a sense of hope.  There are so many strong, brave, loving people who have suffered such loss and grief but who manage to continue to live full, rich lives.  It’s inspirational.
For me, the greatest gift my faith has given me is a belief in the afterlife or perhaps a better phrase is the eternal-life.  I believe we are pure spirit and while our bodies die, our spirits live on.  In The Power of Positive Thinking, Norman Vincent Peale writes, “Another profoundly curative element in the prescription for heartache is to gain a sound and satisfying philosophy of life and death and deathlessness.  When I gained the unshakable belief that there is no death, that all life is indivisible, that the here and the hereafter are one, that time and eternity are inseparable, that this is one unobstructed universe, then I found the most satisfying and convincing philosophy of my entire life.”  I too believe as he does.  While the heartache of losing a loved one can be unbearable, the belief that they are not gone, but in a place I cannot yet be, brings me comfort and with that comfort, acceptance.