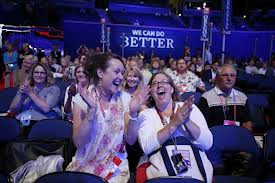 Affirmation:  I
fully recognize and appreciate the gift of living in a free country and having
the right to make my choices known.

“Our passions are the winds that propel our vessel. Our reason is
the pilot that steers her. Without winds the vessel would not move and without
a pilot she would be lost.“  Proverbs

Have you ever watched a political convention?   Politics is not my favorite
subject, to say the least.  I am a
moderate, a middle of the road citizen.
I can usually see both sides of an issue and that can leave me very
confused about for whom I should vote.  I
don’t have a very successful record either.
If a friend or family members favors someone for office they would be
wise to encourage me to vote for the opponent.
I can’t ever remember voting for the winner in a major election.  But, I always vote.  I may not always be as well informed as I’d
like to be, but I always go and cast my vote.
I try, I really do try to gather as much information as possible.  I read about the different people, sometimes
I go to meet them but I’ve never been so impressed or enamored by a candidate
that I was sure I was making the best decision.
The best decision for whom; for me, for my country, for the world?
When I vote I feel like that in itself is the best decision, the
decision to exercise my right to vote.
When I read about and listen to the sacrifices our ancestors have made
and the oppression that exists in so many countries today, I fully recognize
the gift I have been given with the opportunity to choose those I want to
represent me, my city, state and country.

I pray daily for wisdom for our world leaders.  There seems to be so many politicians whose
only concern is their power and their prestige.
Perhaps, that’s why I’m not very passionate about politics.  I don’t have much faith in the people who
chose to be politicians.  I can’t imagine
what drives so many of them to put themselves so far out into the public’s
eye.  I wonder, so often, if it’s not
simply a grand ego trip.  I want to
believe that a person who is running for office is more concerned about me, his
or her constituent, than he or she is about themselves.

When I watch the conventions, the men and women who present
themselves with passion about their concerns and about their desires to uplift
and empower us, their represented, I am almost relieved, relieved that someone
comes across with what I think is a genuine spirit.  But, it’s the people, the audience with whom
I am so fascinated.  I am sure there is a
selection process for those attendees.
I’m sure some have been going for years; maybe it’s a family
tradition.  I know in many ways it’s a
fun experience.  I’ve been to several
business conventions.  The energy
generated by a group of people with a common goal is always palpable.

In 2010 my husband, Sandy, was a keynote speaker for Toastmasters
International in Las Vegas.  It’s an
amazing organization and we were very excited to be there.  There were over 2000 people there from all
over the world.  We met people from
Africa, Asia, Australia and places that began with many other letters besides
“A.”  It was 3 days of high energy, lots
of stories and shared visions.  I would
imagine being at a political convention would be similar.
Passion is the world that comes to mind when I watch the people
in attendance.  Passion!  They must truly love and care about the
process we have here in the United States to decide our own destiny and they
must believe completely in that process.
They have devoted time, energy and talent to participate in the
process.  I find it inspiring.  I believe we all need passion in our lives.

Passion is that quality of life that keeps our hearts beating and
our spirits soaring.  I believe being
passionate about our country, even with its zits, is a worthy pursuit, a just
passion.  I am proud to be an
American.  I am grateful to live in a
land of peace and freedom.  I believe the
United States is a place where dreams can come true.  I am grateful to be a woman living here in
the United States rather than in some oppressive regime.  I believe in our compassion as a people and a
nation.  I value the sacrifices so many
Americans have made and continue to make to help others both here and throughout
the world.

Vote?  For whom will I
vote?  That’s not as important as if I
will vote.  That choice, no that
obligation, is one thing about which I am passionate.  There once was an article in USA Today stating
that thousands of Americans don’t vote. They simply don’t care or they don’t believe
it can make a difference.  Men and women
have died, are dying, punished and even imprisoned because they want, they
demand, the right to have a voice in their destiny.  Yes, I will not let this gift, this opportunity
go unused, unappreciated, The United States of America is the greatest country
in the world.  And, I for one, will
exercise my privilege and hope and pray that I am casting a vote for someone
with passion who will work and lead my country and perhaps our world towards
the highest and best we can possibly be.
I hope you will join me.