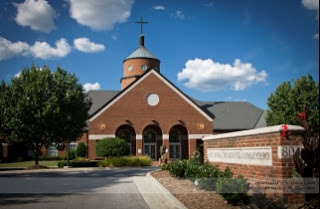 Joy to the world! The Lord has come
Let earth receive her King!
Let every heart prepare Him room

The 2016 Christmas season is here as I write this. Christmas day has come and gone but the season itself lasts until January 6th, Three Kings’ Day. I had spent the beginning of the season preparing for Christmas. I was ready. The question, however, that I kept asking myself was for what had I, we, all of us been preparing?

At the beginning of Advent Father Ryan at Saint Michael the Archangel Catholic Church offered a suggestion to help the faithful prepare. He simply suggested that we focus on joy. It’s such a simple suggestion, so simple but like so many things in life, so very difficult. Maybe not for everyone but I have a feeling it’s true for many people especially at this time of year when we are being reminded, have been reminded for many weeks about how the season “should” look and feel.

I’ve been facilitating a group at A Place for Women to Gather here in Raleigh, North Carolina for the last few months of 2015. We call it “A Sacred Circle.” There are half a dozen women who participate, sometimes more. We take some time to center and talk some about our journaling process. We each create a positive affirmation to focus on for the month, or perhaps the year or maybe for our entire lives. The question I usually ask is, “Do you find that focusing on your affirmation has made any difference in your life?” Let’s face it, if you’re working on living intentionally and you aren’t seeing or feeling any difference, you should find another approach; although I believe with all my being that if you’re truly working on this process of journaling and writing out your affirmations, it cannot not work. The answer is usually “definitely.” I share this with you because my affirmation for December ( or perhaps forever) is, “I focus on the joy in all things.” How, you may ask, has that worked for me?

My gifted acupuncturist, Jennifer Spain, of Ancient Elements Accupuncture always seems to have a lesson for me along with the healing she encourages. Maybe the two can’t be separated. One of our sessions focused on how we manifest reality. I’ve always believed in that principle. It’s another of my affirmations, “I am always manifesting. I manifest my highest and best.” She took this to another level when she proposed that everything that becomes “real” begins energetically. I must admit I forget that we are energy. We are pure energy, just like the moon and the stars, the flowers and the trees, the hills and the dales. It’s hard to imagine that our solid forms are a zillion little atoms and other forms of energy that appear to be solid but that’s the reality. Not only are we first formed by “intention” but everything that comes about begins with a thought, either consciously or unconsciously. Recognizing this concept brings a whole new importance to choosing our thoughts. Do I want to manifest joy or do I manifest fear and anxiety and all the other negative emotions that bring sadness and gloom?

Have you ever been rolling along feeling great and having fun when all of a sudden some unsettling thought pops into your head? I was sitting at a delightful concert with my husband when out of the blue I began to become anxious about some event that I was imagining might take place at sometime in the future. I couldn’t believe what I was doing to myself. All of a sudden my heart was beating too fast, my hands became sweaty and my muscles were feeling achy. Where, how, why was this going on? The joy I had been feeling just moments before was sucked out and I was in “fight or flight” mode. I felt terrible. How did this benefit me? Who did it benefit? Was this how my loving God wanted me to feel? I don’t think so. 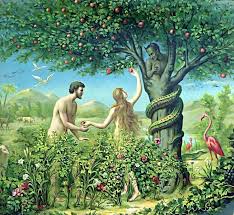 There’s a lot of stories about the devil. Of course, it all begins for most Christians with Genesis and the creation story of the Garden of Eden. The story is that he took the form of a snake and transformed the garden into the world we have now. He, Satan, did not want those two people, Adam and Eve, or for that matter any of us to be content and happy. Whether or not you take the tale literally the message is the same. There is a force beyond our understanding that relishes our state of suffering; not only does it relish it, it does whatever is necessary to promote it. As I sat at that concert and felt that feeling of panic come over me, I decided the devil was moving in using his or her tools to sap my joy and my peace. Once I discovered who or what was at work here, I could then chase it away with a command to “go to hell” or “get behind me Satan” and reclaim my equilibrium. The devil may have tools but I have tools too. I have prayer and faith and a brain that I can use to foster those skills that sooth me and lift me up and one that has changed my life is deciding how and what I want to claim. I claim joy!

Tom Hanks portrayed James Donovan in the film Bridge of Spies. It’s the story of the Cold War and an attorney who is asked by his government to facilitate the swap of a prisoner of war between Russia and the US. The spy is played by the veteran actor Mark Rylance. Tom Hanks keeps asking him if he’s worried, frightened, anxious? And the spy, Rudolph Abel keeps answering with the phase, “Would that make a difference?” Since its release several people have mentioned this movie to me and each one has focused on that phase. “Would that make a difference?” Everyone seemed to understand that it would not. The challenge is to move that understanding from our heads to our hearts. Once we’ve accomplished that, we will be in a very good place.

My preparation for Christmas revolved around my affirmation created during our December Sacred Circle, “I choose joy in all things” and I found that it did definitely make a difference in how I approached not only the season but each activity in which I participated, each person with whom I interacted, and most importantly each moment I was able to let the intention of claiming joy reside in my heart.

May you too have a Blessed, Joyful Christmas and a Happy New Year. 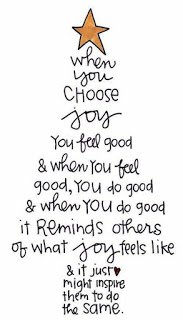