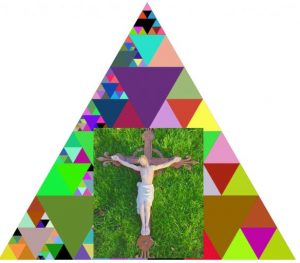 *Prepare your space: Find an area where hopefully you will not be disturbed for your quiet time. Perhaps you want a blanket for yourself.

*Gather your supplies: Timer, note paper and/or journal, pen. You may want to bring in one or two inspirational books.

*Create an “altar”: Put a few meaningful items out, include a candle.

I Heard the Voice of Jesus Say

The Sign of the Cross, Our Father, Hail Mary or your choice.

This is a reflective, healing time and we ask that it be filled with the love of the Holy Spirit, the care of Mother Mary and the guidance of all our guardian angels. We are here to learn from one another and to support each other on our journey towards a closer, more intimate relationship with Our Lord.

*Write out a prayer request or a few and add them to your “altar.”

Easter is very close. The Lord will soon rise again.  Find time and a practice to stay connected to God, the Divine, Our Lord. Listen to what comes into your heart and your life during this time.  Claim love, peace, hope, trust, compassion and gratitude?

Using your journal write about any insights. (10-15 min.)

40 Some in the crowd who heard these words said, “This is truly the Prophet.” 41 Others said, “This is the Messiah.” But others said, “The Messiah will not come from Galilee, will he? 42 Does not scripture say that the Messiah will be of David’s family and come from Bethlehem, the village where David lived?” 43 So a division occurred in the crowd because of him. 44 Some of them even wanted to arrest him, but no one laid hands on him.

45 So the guards went to the chief priests and Pharisees, who asked them, “Why did you not bring him?” 46 The guards answered, “Never before has anyone spoken like this one.” 47 So the Pharisees answered them, “Have you also been deceived? 48 Have any of the authorities or the Pharisees believed in him? 49 But this crowd, which does not know the law, is accursed.” 50 Nicodemus, one of their members who had come to him earlier, said to them, 51 “Does our law condemn a person before it first hears him and finds out what he is doing?” 52 They answered and said to him, “You are not from Galilee also, are you? Look and see that no prophet arises from Galilee.”

What did you hear God sharing with you? What do you want to share with God? (10-15 minutes)

2. Choose a sacred word on which to focus.

5. The phrase that often precedes Centering Prayer is: I let go of security, affection & control and fully accept this moment exactly as it is. (Optional)

6. Take a few breaths at the end to return to the present moment and to reflect
on the experience.

*Make it Your Own

Perhaps you have an inspirational book you have been meaning to investigate but you just haven’t had the opportunity. Now is the time. If you have some time left before the end of the hour open it and see what other messages the Holy is sending to you.

You could also use this time to say the Rosary. Saturday in the Catholic Church is set aside as “Mary’s Day” and the reflection is on the Joyful Mysteries.

****Dear God,
Speak gently in my silence. When the loud outer noises of my surroundings and the loud inner noises of my fears keep pulling me away from you, help me to trust that you are still there even when I am unable to hear you. Give me ears to listen to your small, soft voice saying: “Come to me, you who are overburdened, and I will give you rest… for I am gentle and humble of heart.” Let that loving voice be my guide. Amen

****Merciful Father, in the name of our lovable Jesus, His Virgin Mother all your angels and saints, I ask you to set me on fire with the spirit of your love and to grant me the grace to deeply love you.

****“Do not be conformed to this world, but be transformed by the renewing of your minds, so that you may discern what is the will of God-what is good and acceptable and perfect.” Romans 12:1-2

*Sharing a Word Exercise – choose a word from your reading or your quiet time (your sacred word?) and share it on an email to me. Feel free to share any other thoughts or insights you have gained from this sacred time. I will send out an email with everyone’s response some time today.