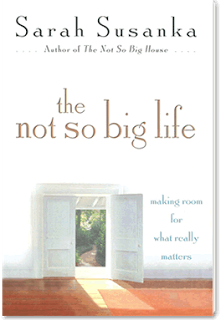 Affirmation:  I may not be right all the time but sometimes
I have some really good ideas.

Several
years ago I took a work shop at Duke Integrative Medicine with Sarah
Susanka.  It revolved around her book, The
Not So Big Life.  Sarah is an
architect who was one of the first people to present the concept of living in
smaller, more efficient homes.  She
encouraged people to use all their space and not to have a bigger footprint
than necessary but not to give up those things that add to the quality of a
home.  In fact, in her first book, The
Not So Big House, she recommends adding special features to make small
space even more inviting, like round windows and rich warm woods and moving
walls.  I loved her first book and when
our study group, The Seekers, were ready for a new study we chose her book
about The Not So Big Life.  It
took us a long time to go through it.  It
is chocked full of self-discovery questions.
When the workshop presented itself, it seemed like a natural fit.  Two of us went for the weekend.  It was the worst run workshops and yet it was
one of the most insightful workshops I ever attended.
Sarah had
what appeared to be a very general outline.
There were about 50 people there and it was obvious from the start that
her approach was to simply let the presentation evolve.  We never saw the book.  She never mentioned the book.
There are
guidelines for group events.  You can ask
any therapist.  The first thing you do is
assure everyone that they are safe in this group.  You do that by asking everyone to hold in
confidence whatever is shared during the time together.  That wasn’t done.  In fact, there wasn’t one guideline
mentioned.  It was never suggested that
those who like to talk give some thought and space to those who are
quieter.  It wasn’t mentioned that a
participant should only talk about their own experience and not lecture the
group about their expertise. There were no guidelines whatsoever.  Well, there was sort of one.  Don’t run away.  Go towards that which you want to go away
from.  I was ready to leave after the
first hour.  I also almost didn’t return
for the last day but I kept that one suggestion from her in my mind and hung in
there.  It was good advice.

At one
point in the session a list was distributed.
You were to read the list and circle the comments you have ever said to
yourself.  Comments like, “Boy, am I
stupid” or “I am such a loser” or “I am so
unattractive.”  I’m sure you get the
picture.  It was all the negatives things
we sometimes say to ourselves.  It was
very sad.  The list took up two columns
on a full page.  I was doing pretty well
with the self-talk list.  I hadn’t
circled anything when I came to, “I know how to do it” and “I’m
right.”  Well, yes!  I find myself saying that a lot.  What’s wrong with that?  I mean I had just been thinking how maybe
Sarah needed someone to help her run her workshops, someone like me who knew
how to structure such an event. “I know how to do it.”  Was that a problem?  How did that interfere with my life and my
relationships?  Then the light went
on.
Who wants
to be around someone who always thinks they know the best way?  Who wants to be around someone who is always
right?  No one, that’s who.  What I perceived as strength was also one of
my greatest weaknesses.  It was an
epiphany!  It was a personality shadow on
which a light had just been shone.

Now, I
try harder to let people do it their way, not mine and not to judge it as right
or wrong.  It’s just different.  I try harder to listen to other people’s
concepts and ideas and once again accept that they aren’t seeing things the way
I do but that’s ok too. But, sometimes I still look around and think I could
help an organization or two run better than they are running, like the government.  So, when I received this hoax email recently
I found myself agreeing with most of the suggestions presented.  If I ran the government, this is what I would
want to see happen.  This seems
right.  Well, it’s my government so in a
way I am responsible for its operation.
I am sad to admit that considering the terrible state it’s presently
in.  But, even though Warren Buffet never
said what is written below, I support these ideas.  I’m sure they are right.  Our government needs to change and since I
like to tell people how to improve their organizational skills, I am sharing
this latest group of suggestions with my readers with the hope that maybe
together we can help congress to finally get it right.
Warren Buffet is asking each addressee to forward this email
to a minimum of twenty people on their address list; in turn ask each of those
to do likewise. At least 20 if you can. It has to stop somewhere!
*Congressional Reform Act of 2013
1. No Tenure / No Pension.
A  Congressman/woman
collects a salary while in office and receives no pay when they’re out of office.
2. Congress (past, present & future) participates in
Social Security.
All funds in the Congressional retirement fund move to the
Social Security
system immediately. All future funds flow into the Social
Security system and Congress participates with the American people. It may not
be used for any other purpose.
3. Congress can purchase their own retirement plan, just as
all Americans do.
4. Congress will no longer vote themselves a pay raise.
Congressional pay will rise by the lower of CPI or 3%.
5. Congress loses their current health care system and
participates in the same health care system as the American people.
6. Congress must equally abide by all laws they impose on
the American people.
7. All contracts with past and present Congressmen/women
are void effective 12/31/13.
The American people did not make this contract with
Congressmen/women.
Congressmen/women made all these contracts for themselves.
Serving in Congress is an honor not a career. The Founding Fathers envisioned
citizen legislators, so ours should serve their term(s), then go home and back
to work.
If each person contacts a minimum of twenty people then it
will only take
three days for most people (in the U.S. ) to receive the
message.
Don’t you think it’s time?
THIS IS HOW
YOU FIX CONGRESS!
What do
you think?  I agree.  Do you think I’m right and I know how to do
it?  Maybe it’s OK once in a while to
share what I think are some really good ideas.